NAME OF PROJECT: SHEPHERDS FLAT – Project #9604
MONTH TO BE BURNED: Summer/Fall season
AGENCY PLANNING PROJECT: NPS/VNC
LOCATION: West side of Pala Comado and both sides of Cheeseboro Canyons.
BURN OBJECTIVE: Hazard reduction and training
TEST FIRE LOCATION: NE end of project near DP-3, mid slope, E aspect.
FUEL TYPE AT TEST FIRE LOCATION: 6’ Chaparral 75%, Grass 15%, Sage 10%
SLOPE AT TEST FIRE LOCATION: 30% – Ignite the fuel so that the fire is free to move in all directions in order to evaluate the variations of flame lengths in all alignments possible.

Log the results of the observations of test fire behavior variables on the TEST BURN FORM.

GO OR NO GO: Determine from the test fire if the burn will meet objectives and recommend next action for approval by the I.C.

The test burn will be lighted at one point only and left to burn until it becomes stabilized in line of fire configuration then at that point the test fire will be evaluated and a go or no go recommendation given the I.C.

COMMUNICATION AND PREDICTION: While lighting fire the firing boss is to communicate with Division and relay the expected fire behavior resulting from the firing action on an ongoing basis.

CONSTRAINTS: To ignite the perimeter in such a manner as to minimize the fire environment extending over the line and eliminate escapes. Light fires to create (points of fire or line of fire) Use the one lick method – light a spot, walk 50 ft. light another. Use little or no projectiles and avoid lighting areas on fire.

SLOP OVER AND ESCAPES: To evaluate escapes that do occur and take initial action to contain the escape and if that action fails, request additional resources through the Division Supervisor.

Ops. will direct all interior firing with the Aerial Ignition System making sure the line is protected from runs generating from the interior of the burn, then directing the fire on fire behavior in the interior.

PERIMETER FIRING SEQUENCE: The perimeter firing will proceed as follows:

CONDITIONS: The wind being from the NE or E under 10 mph Sequence of firing lines will be from the North end from W to E beginning at DP-1 and continuing to DP-3 then to DP-4,5,6,7,8 and hold until the wind shifts to a SW or W direction. The firing will then finish the perimeter between DP-1 and DP-8 and will be done beginning at DP-1. after the wind is in a favorable alignment for holding the west end of the burn area.

INTERIOR FIRING PLAN: Ops will reinforce the perimeter using aerial ignition devices and then begin burning out the interior areas as determined safe to do so.

DIVISION A: From DP -1 to DP -2 has low escape potential in the morning if winds are from the East as expected . Just East of DP-1 there is a south aspect that puts slope in alignment should fire relocate there. Near DP -2 and East for 1/4 mile there is a slope with a South aspect which will be in alignment with slope and if fire were to get established on that slope it could make about 30 acres in one run.

From DP-3 to DP-5 there are 4 saddles that need to be considered as highly likely to create squirrely winds when ignited but escapes across the lines will quickly go out of alignment and fire behavior will be out of alignment with slope and wind.

DIVISION B: DP-4 to DP-5 escapes will be out of alignment with wind and slope and be most easily contained.
From DP-5 to DP-7 the line is within the Boundary II burn so fuels will be lighter and this area has low expansion capability.

DIVISION C: Div. C, from DP-1 to DP – 8, the west flank is likely to re-locate across the fire line if firing takes place while the wind direction is from the East (E) or Southwest (SW) as happens in the case of the normal morning and midday slope and valley winds of the area. The potential fire environment will be great enough to put fire over the line to the West. In the morning hours 0900 – 1100 the wind, slope and preheat forces will be aligned to create the most active fire on the terrain to the East of the ridge, elevation marked on the map as 2068 and all the way South to DP -8.

The specific points where an escape is most likely to gain acres are where the fire can run up slopes that are on the South side of the ridges extending to the bottom of the Palo Comado canyon. There 4 areas that meet this criteria and each has potential to make 25 to 50 acres on the first run. This line needs to be able to mount a quick and decisive suppression action with combinations of hoselay and hand crew attack to keep the acreage small. There is potential for both under and overreacting to escapes on this division. Each escape has potential to cause aircraft to be ordered and an escape fire to be declared. The best action is to prevent an escape by having lots of engines on hand to put water on a spot that gets across the line.

PROVISIONS: This analysis is predicated upon the weather being within the RX window and there are no unforeseen wind events. The local winds prevailing for the duration of the burning period and will begin in the morning blowing lightly from the East and rotate clockwise to Southerly winds the strongest of the day at midday. Winds from the SW in evening and through out the night to transition at midnight back to NE which is a 180 degree shift shortly after midnight.

SAFETY: Safety considerations should include the dust devil type fire whirls that can travel any direction. A firefighter was burned when a fire whirl swept over him when he was looking the other way. Be sure to have lookouts as a safety buddy for those looking at exposures. Adding fire near saddles and in canyon bottoms causes thermals from the heat which make winds squirrely and the fire behavior highly variable. Predict which way the fire behavior is going, getting worse or easier, then act accordingly. 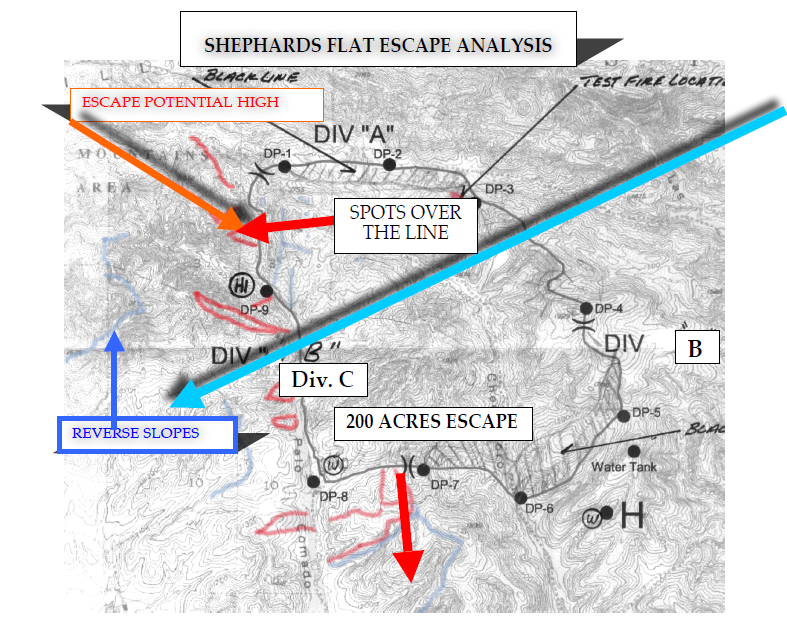 Shepherds Flat escape analysis depicting escape potential in the case of a wind event.  Two annotations are added to the map showing the two actual escapes that occurred.

An (E) or (NE) or (SE) wind affecting the fire spread during the time the firing is conducted between DP-1 and DP-7 will result in increased risk of fire spread to the west. These points outlined in red are the primary points of potential escape. The reverse slopes notation and light blue lines are set back considerable distance from the west boundary and are the place where a spreading fire could be contained most effectively. If the fire will spread downhill with the wind then the escape potential is serious. Since there are many exposures that are vulnerable during E wind situations the risk of a costly escape is high.

PS: Two escapes occurred where predicted but were quickly picked up. 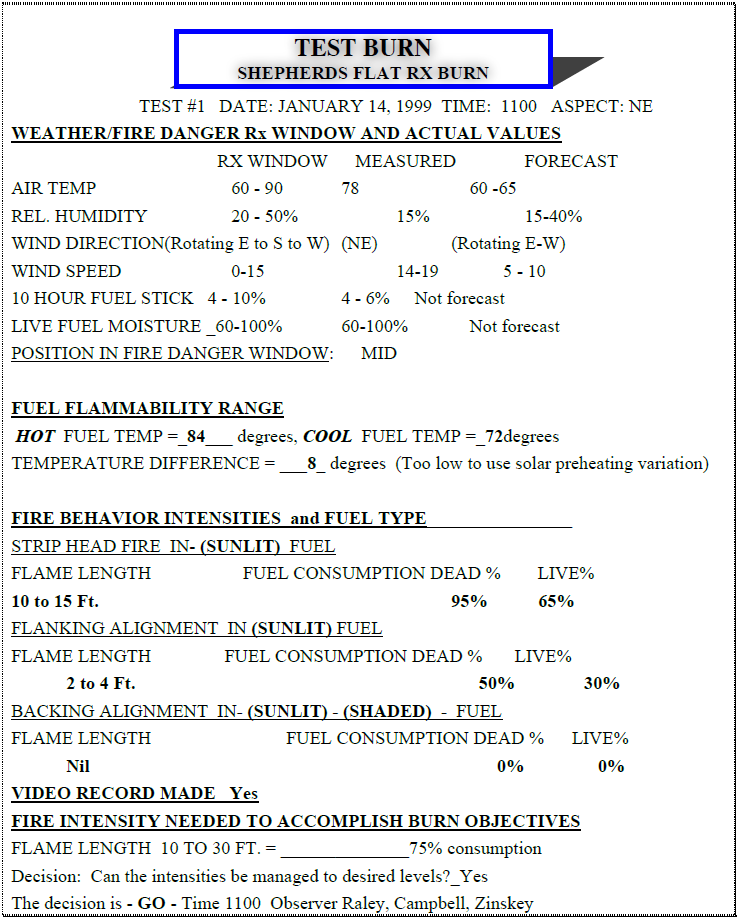