Three major forces heavily influence variations in speed and intensity of wildland fires: wind, slope and the preheating of fuels. Wind and slope both act on a fire by changing the angle and orientation of the flame with respect to the fuel bed. Preheat is a force that alters the fire’s intensity. Solar heated fuels ignite more readily than cooler fuels. Solar preheating is a force multiplier when applied to the wind and slope force vectors.  These potent forces can work in cooperation or against each other.

When these three forces align, the fire is going to be at its maximum intensity. When these forces are not in alignment, the intensity is lower than the maximum. This is the alignment of forces concept. Forces that complement each other (producing a cumulative effect) are said to be “in alignment.” When forces are not aligned, and are below their maximum potential to aid the spread or intensity of the fire, the forces are then “out of alignment.” Each side of a fire, the head, flanks and heel, has a different alignment and intensity. For example, if the head is in alignment with the wind, then the flanks and heel will be out of alignment.

Across the fireground, within a single fuel type on any given day, variations can be observed in the fire’s intensity, rate of spread, and consumption of live and dead fuel. 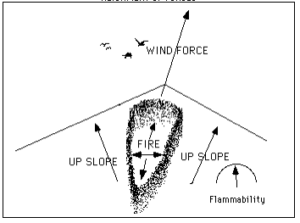 The forces of wind, slope and preheat all in alignment.

At the heel, the fire spreads against the wind backing down the slope at the peak of the curve. The minimum intensity occurs at the heel of the fire.

For example: If the wind should shift 90 degrees, the flank of the fire shown in the illustration will become the head with intensities as great as the head. The flank will have two of the three forces (wind and peak flammability) in full alignment.

The head will lose the added force of wind and have two of three forces acting in alignment. The result might be equal intensities on one flank and the head. If the fire spreads to another aspect, the force alignment must be determined and result in a prediction of intensity change.

Following is a video of a test fire lit in preparation of a prescribed burn.  The plan was to wait until the solar heating dried the grass on the east aspect to 40 degrees surface temperature above air temperature.  The test would be on a heated aspect and be free burning.

This fire was a test burn lighted below a small ridge so the fire would burn in alignment with slope and the 3 MPH easterly wind blowing from left to right in the video, from heated, sunlit fuels towards cool, shaded fuels.  Wind, slope and preheat are acting on the fire to either help or hinder the spread. When some or all of these forces are in alignment  the fire burns with greater intensity, and when the forces are out of alignment the fire behavior ebbs. Observe how the fire intensity changes as the alignment of forces change.

The next question is how is the fire going to burn—or exhibit one of these signatures—as it moves over the small ridge, and how will the alignment of forces that are different there cause each signature?

The prediction of change in fire behavior is thus:

The head fire will go out of alignment with wind, slope and onto a cool, shaded aspect.  The fires head will reduce and the signature would replicate the lower flank of the fire.

The tactics should one want to suppress the fire would be simple:

Alignment of forces is a simple way to view the fireground and to explain how the fire will change in intensity. A segment of a wildland fire will gain intensity and speed where it finds a time or place of more favorable alignment. To communicate this change say; “The fire is going into better alignment with —” (naming the force of change.)

There are three primary causative forces present which influence the variations in intensity and rate of spread of a wildland fire. As the fire burns over the topography, the forces change independently. Each force can aid or retard the spread. The forces can work together or cancel each other’s effects out. The three forces usually associated with fire behavior are Weather, Topography, and Fuel, AKA the wildland fire triangle.