Learn from the Past, Predict the Future

Wildland firefighters face variations in fire behavior that occur under all fire danger situations.  Some firefighters instinctively know when and where the variations may occur.  Unfortunately, firefighters who do not know these things have a reduced situational awareness.  Many burnover situations could have been avoided had the firefighters known how dangerous the fire potential was, and had they told others how they knew.  Reading accident reports from the 1949 Mann Gulch through the 2006 Esperanza fires reveals the simple knowledge of when and where the variation was about to occur would have made a difference.  It is better to leave early, rather than to stay until the fire runs you out.

The Campbell Prediction System enables you to:

Logic allows an explanation of what the fire is telling you, and reasoned tactics maintain effectiveness and safety.

Wildfire suppression tactics are sometimes unsafe and can result in injuries and/or fatalities from burnovers. Prescribed burning projects sometimes escape control due to poor planning or execution.(3) Tactics often fail as a result of fire behavior predictions that are either not made or are inaccurate. [4] Why do these events occur?

Firefighters do not have a simple and reliable method to assess the fire and fireground situations. Firefighters are taught to think about suppressing the fire and not to think logically of how the fire could thwart their plan. The firefighter’s emotional hook to fight fire too often outweighs a logical approach and can lead to accidents. Firefighters that cannot explain the factors that cause fires to transition from controllable to beyond human control are more at risk.

Current training points to a dependence on staying informed of the air temperature, relative humidity, and the forecast wind direction and speed. These are generalities that are not specific to time and place; this data is not the best information to base a tactical plan upon. Unfortunately, most scenarios use these fire danger elements and incorrectly expect that accurate fire behavior predictions can be made.

Statistics show that there is a weakness in the training of firefighters. Many rules and fixes for the problem have been implemented with no significant reduction in burnovers. Accident reports assign causes of fatalities to these weaknesses.   Some blame it on attitude or leadership deficiencies. Others blame it on failure to obey the rules and “watch outs.”(5) Reducing the rate of burnover and shelter deployments will require a new approach.

There are three primary forces causing variations in fire behavior. They are wind, slope, and pre-heat. When these forces align, the fire is going to be at its maximum intensity. When these forces are not in alignment, the intensity is lower than the maximum. This is the alignment of forces concept. Each side of a fire–the head, flanks and heel–has a different alignment and intensity. For example, if the head is in alignment with the wind, then the flanks and heel will be out of alignment. Each of these alignment sets produces a fire signature, which is the observed fire behavior within the current alignment of forces. The fire signature is the ground truth. It is how the fire will behave in similar conditions.

What is important for situational awareness is when and where the fire signature will exceed the threshold of safety for the firefighter. This awareness becomes more accurate with practice.

A trigger point* is a place on the terrain where a change in the alignment of forces will change the fire behavior, creating either opportunity or danger. Trigger points are a time and/or place the tactic or placement of resources needs to be changed to assure firefighter safety. There are two crucial trigger points to establish: one is where the fire will change; the other is when and where fire on the landscape will trigger a decision to change tactics. Selecting a trigger point of change or the trigger point for tactical adjustment requires firsthand experience. Neither trigger point was established when the 1985 Butte Fire made an in-alignment run and drove firefighters into fire shelters.[6]

The following is a case study showing the successful application of the Campbell Prediction System on the 1994 Dillon Fire, in the Klamath National Forest (California).

The Dillon Fire was located southwest of Dillon Creek. On the afternoon of August 12 at the peak of the solar heating time (1600 hours) it moved to a place where it was in full alignment with slope, wind and preheat: on the Southwest aspect with a Southwest wind. From there, the fire made a run to the top of the ridge through timber crowns with 150-foot flames. The following day, a small spot fire on top of a knob was detected by an early morning infrared flight. A firing operation along the burn out line had begun on the previous day shift and was planned for the following day shift, the day of the fire run.

Figure 2 is a shaded relief map illustrating this situation. The fire’s run on the SW aspect is indicated with a red arrow on the left within the orange shading of the main fire. The wind direction is depicted with a blue arrow in the lower left. The burn out line and firing operation can be seen to the north and east of the main fire, as indicated by the brown line along the ridge line and the firefighter icons. The spot fire is located between the main fire perimeter and the lower end of the firing operation. 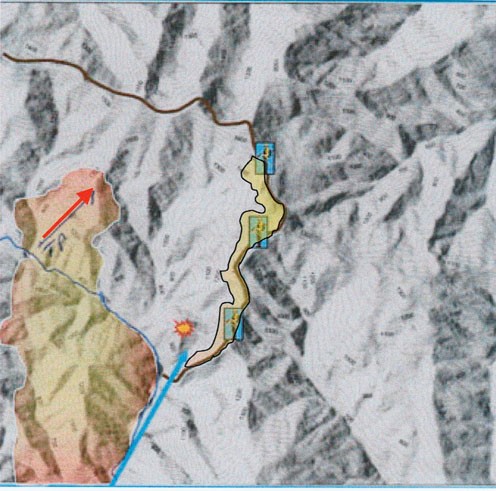 The Plans Section staff showed this information to the Fire Behavior Analyst and Operations Chief. The conversation went thusly:

“This fire burned through the night and will continue to burn and move downhill. After the inversion burns off over the area, the fire will move faster. Let’s identify where the fire may threaten the firefighters on the line.

“The trigger point for a [fire] run is at the bottom of the canyon. There, the fire will be in alignment with wind and slope on a hot aspect. When this happened before, the fire launched to the crowns of the timber and produced 150-foot flame lengths. The fire is telling you how it will behave. That run is very likely to occur sometime after 1600 hours. We recommend the firefighters on that entire burn-out and holding operation be evacuated by 1100 hours.”

At noon, the firefighters were sent to a safety area and the fire made a run with the same signature as noted before. No personnel were in the track of the fire when it made its run. The fire burned over the ridge, and like the fire signature of the previous day’s run, it replicated to a slow moving ground fire that was quickly contained.

Figure 3 is an illustration depicting the potential fire behavior on that day. It is similar to the actual graphic used on the fire. The fire’s predicted tracks are red arrows that emanate from trigger points depicted with T’s. The burn out tactic was time-tagged to be off line at 1100. This illustration also shows the actual run that the fire made on August 13, at 1732 hours, represented by the orange shading in the center. 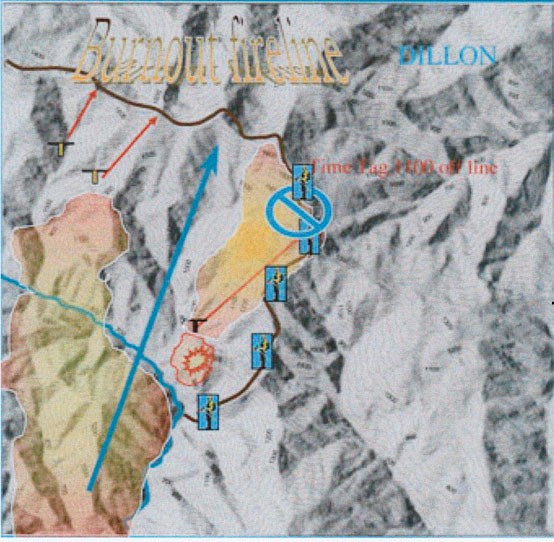 The behavior of the Dillon Fire has many similarities with the well-documented 1994 South Canyon Fire. [7] Figure 4 compares the Dillon and South Canyon terrain, and shows the spot fires and the fire runs made by both fires. The two fires are displayed side by side; the Dillon Fire is on the left and the South Canyon Fire is on the right.  In both cases, the crews were working indirect. On the Dillon fire the crews were firing out the ridge top when a spot fire was located on a hilltop between the main fire and the firing job.   Both fires had been burning all night and would continue burning out of alignment with slope until they reached the bottom of the canyon. 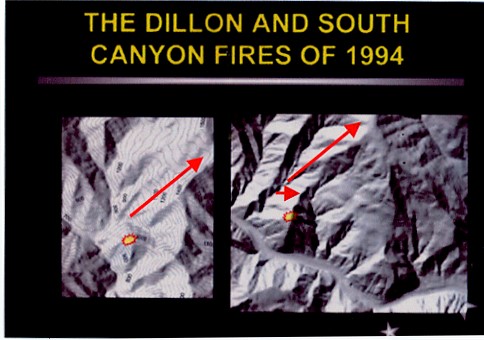 The similarities of the two fires are not unique. The fire situation began on a hilltop and backed downward to a trigger point where the fire found terrain that was in alignment. The trigger point for a run in alignment with wind, slope and near the peak time of the solar heating period is shown at the start of the arrows. The arrow indicates the track the fire took. The Dillon made its run at 1732 hours, the South Canyon at 1630 hours.

The difference, however, is in the outcome. The South Canyon firefighters failed to understand the fire’s potential and they ran the escape route after the fire began its run. Thirteen firefighters perished.   On the Dillon, the threat and trigger point were identified in advance and the firefighters were evacuated from the path before the run started.

There are many fires where this system could have made a difference in the outcome.

* The NWCG has renamed Trigger Point to Management Action Point. In this book, we will continue to use the original term.