The Campbell Prediction System used for prescribed fire planning, focuses upon the major forces that cause the variations in fire behavior. These are the differences or changes of:

Understanding how to recognize these differences and observing their relationships is a great aid in predicting fire behavior.

A variation in surface fuel temperature is easy to see on the topography. The aspect nearest to perpendicular with the sun is experiencing peak solar heating, i.e. the aspect with the shortest shadows. These areas are the hottest, most flammable places at that time.

What is the percentage of hot to cool fuel in the fuel bed?

Observations of fire burning in both HOT and COOL fuels at the same time reveal to an observer the range of fire behavior is that is caused by the flammability difference in the fuels. Given that other factors are about equal, the range is the difference in the flame lengths between the two areas. 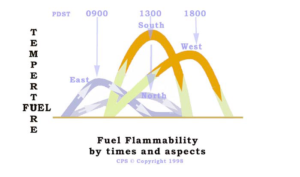 The Campbell Prediction System makes use of the CPS Fuel Flammability Card to serve as a reminder and quick reference of the timing of the peak flammability’s and to determine if the aspects are increasing or diminishing in fuel flammability.

The procedures for quantifying the fire intensity variations due to fuel flammability differences are as follows:

Measurements of the variation of fuel temperatures are taken and recorded. These measurements are taken at the start of the test burn and at the time of peak flammability of each selected aspect. The information gleaned is then added to the weather readings to quantify the degree of fuel temperature variation under the current fire danger condition. Air temperature, relative humidity, wind speed and direction, fuel stick and live fuel moisture readings are also recorded.

Test fires are set to determine the degree of variation of intensity. The flame lengths and fuel consumption associations are then recorded. As noted earlier, it is easy to see the effects of different fuel temperatures by observing the differences in flame lengths between HOT and COLD fuels.

Consider this: the differences in fuels’ self shading ability, Grass = 5%, Oak brush 60%
Oak brush is more sensitive to the position of the shade relative to the fire than grass or chemise brush is.

When you identify the flame length that produces the consumption objective the optimal flame length to manage to have been identified. Note how the flame entered the plant. There will be a difference in the consumption determined by alignment of preheated side and the entry of the flames. Fire entering the plant in alignment with the hot side will consume more fuel. Fire entering the plant out of alignment with the heated side will subside and consume less fuel.

Fires set at various alignments to the forces of wind and slopes are needed. Three primary alignments will create three intensities. From one ignition of a spot set on a slope, fire will burn in full alignment, at 90 degrees of alignment and 180 degrees out of alignment. These are the HEAD, FLANKS and HEEL of the fire.

Record The Test Fire on Video

Because the variations of alignments and the resultant intensity variations it is important to record the event in a visual way. Using a computer program that allows the addition of graphics, we produce a video record of the fire danger values and the measurements of the variables. The video, records the results that could replace the fire model in depicting how fire reacts to sets of conditions. The video records the variations and in so doing, you can see for yourself the truth of how the fuel burned. The next time re is a plan to burn similar sites, the video record can serve to reestablish the fire teams reference and expectations.

Record the Results of Various Intensities on Fuel Consumption

List that information on the VNC test burn form. If the test was conducted at the time the aspect was at peak flammability then you have seen and recorded the maximum flame lengths the fire will produce while under the same fire danger condition.

If you do not know where on the fuel flammability curve the test burn was performed, you are still uneducated about the possible variations in this fire’s behavior. If you observed the head of the test burn fire burned with 10 feet of flame lengths and you were unaware where of the fuel flammability curve the test was completed, you would not know the time the HEAD would increase or decrease in intensity.

Test burning for all points on the flammability curve would reveal the maximum variation in fire intensity and consumption of fuels. This procedure would most likely be overkill in real prescribed burning programs, but would produce valuable data for storage and later use. If it were possible to capture all the information that all the wild land fires have to offer, we could apply it usefully on prescribed fire programs. Perhaps other fire agencies can be encouraged to follow Ventura County’s Wildland Fire Officers example.

For instance, a wild fire is burning and you observe the flame lengths of the head, heel and flanks. If you noted the time and aspect (or where on the fuel flammability curve it was burning), the weather and topographic information of percentage slope and fuel classification, you would have a complete fire behavior segment that will repeat under similar conditions.

If the above information was available and a test burn was planned under similar conditions, the information could replace the test burning. Unfortunately, this information is rarely captured. And the result is that we have to start from scratch each time we do a prescribed burn project. In these days of computer technology, we have the capability of capturing, storing and retrieving vast amounts of information.

If agencies are to improve their skill and proficiencies in prescribed burning, then they must start to accumulate, store and review fire behavior information. We must become knowledgeable of the variations on the fire ground that can be used to assure successful accomplishments of prescribed burns.

We should practice the steps to success, teach how to, plan accordingly, test to reveal the truth, implement, record the event, store the information and review the information before the next burn.

What Information to Use, when and what for

Prescriptive burning windows consist of the highs and lows of many fire danger elements. The RX window that is information used in calculating the fire intensity using a fire model produces one set of values. The model assumption is that all values remain constant. Two or three sets of conditions are fed into the calculation and produce some variation of intensities. The RX window is adjusted and written into the prescription to be adhered to. This information is necessary to allow torching the land. To do so without this processes would be a negligent act or arson.

Because this information represents the fire but is not sufficient to describe the variations that normally occur, the firing technician must have available more specific information. Up until now this information was contained in the experienced fire officers intuitive sole. Intuition is not a reliable tactical tool. Conducting the firing operation is very different than planning the operation. To know if an officer has the right intuition another with known perfect intuition must evaluate that officer while in the act of working with a fire. This method of training and gaining experience is costly in many ways.

Replacing intuition with a system and special information is what CPS has attempted to accomplish. The C.P.S. System adds the fire behavior variations to information required in the prescription. The fire intensity variations observed are the reality of the situation and can be observed and quantified.

Many Times, The Fire Behavior is OK, but We’re Out of the RX Window

On a number of occasions during active projects, the weather readings indicate that the project burn area has climbed out of the fire danger window. The required tactic is to stop burning. In reality, however, the actual fire behavior variations are well below the threshold of control and within the fuel consumption objectives. To continue is not in agreement with laws and policies. There now must be some attempt to ask for a waiver to continue. What reason can be used that will make sense to the administrator who may be in an office downtown?

Many officers have recalculated the fire model and by tweaking the inputs create a correction and ask for a window opening. There must be a better way than that!

How to Continue When Out of the RX Window

If the burn is started while in the RX window why not discontinue its use at that point? Ask for permission to use the new fire intensity window created during the test fire phase of the burn.

The prescribed burn manager can manage the fire behavior intensities and can give more weight to the fire behavior window and less to the theoretical fire danger window. The observed fire behavior is the real situation. The prescriptive window is a guideline and contains theoretical and generalized fire behavior values. Logic implies that reality should replace theory and actual fire should replace the fire model at the point in time fire introduced. Requesting or authorizing the burn to continue needs to be based upon a thorough understanding of the capability of the burn boss and crew to manage to objective intensities under the observed fire conditions even though the hot side of the RX window may be exceeded. Let the real fire have the final say before you throw the project out the RX window. When the burn situation is such that intensities can be managed within the intensity window, it is appropriate to request continuation of the project. The request: “The fire intensities are within the intensity objectives and we can manage the intensities under this fire danger condition.” Communicating the situation is all that is necessary to enable continuing of the project.