Solar heated fuels ignite more readily than cooler fuels. The effects of wind and slope on a fire are well understood, however, the topic of solar preheating and its effects on fuel moisture and fuel temperature warrant further discussion. The general air temperature and relative humidity do not cause the major differences in fuel flammability across the fireground, but instead, it is the microclimatic variations influenced by solar radiation that cause variations in fuel flammability and consequently fire behavior.

Solar radiation affects the moisture content of the fine fuels during the daytime. On a sunny day, the solar radiation is heating the surface of the sunlit fuels and driving off moisture. The relative humidity is regulating how fast moisture can be driven off by radiation, but it’s the radiation that’s heating and drying the fuel. Conversely, shaded fuels have more moisture content.

The moisture content of forest fuels has an important influence on fire behavior. When fuels are moist, combustion is slow because part of the required heat is wasted in converting moisture to steam. As fuels become drier, the rate of combustion is increased because less heat is required to drive off moisture.

To predict changes in fire behavior from the fire line, one must learn to consider the fuel an unstable element. Sunlit portions of the fuel bed are heated and dried by solar radiation while other fuels nearby may be shaded and thus cool and moist. The temperature of the fine fuels can vary more than 80° F on a hot, dry summer day.

The fuel bed is affected by variations of sun and shade all day as the sun moves across the sky. There are differences in fuel flammability due to the fuel bed’s aspect (e.g., east versus west facing slopes), and also from shading provided by trees, smoke, clouds and topography. Even one side of a bush can be more flammable than an opposing side in sunlit fuels.

The variations in solar heating by time and place make the fuel an unstable element in the fire triangle. Learn to observe sun and shade patterns to see fuel flammability variations. Predict fire behavior potentials based upon your observations.

A wooden fence drying in the sun with the sunlit regions giving off steam.

On the fireground, the relative humidity is not the cause of variations in fuel flammability by time and place, rather it is the sun. Humidity only plays a part in changing the fuel moisture when there is no other radiation impacting the fuel. For instance, at night.

More about Fuel Temperature and Flammability

The basis for many fireline behavior forecasts is the knowledge of where and when fuel flammability differences exist, or will occur. Under what is usually considered “stable fire danger” conditions, the fuel flammability is changing constantly.

Fuel temperatures vary as much as 100 degrees F. from sunrise to peak flammability time. Ignition of available fuels is usually below 500 degrees F. On very hot dry days, shaded fuels are roughly the same as air temperature while sunlit fuels measure near 180 degrees F. At 180 degrees F., these fuels are almost twice as hot as the shaded fuels. This accounts for one major variable in fire intensities that occur under the same fire danger conditions.

The tendency of fuel to dry out is a function of the difference in vapor pressure between the fuel and the air right around the fuel. This difference is the driving force.

As the sun shines on the fuel both the fuel and air around it warms (through conduction and convection). During the heating process, the water molecules in the fuel bounce around more causing the vapor pressure to increase. Meanwhile, the warming air in the fuel microclimate can hold more water because it is becoming hotter and less dense. The amount of water that air can hold (called the saturation vapor pressure) is a curve that has an ever-increasing slope as a function of temperature.

Increasing the temperature of fuel from 77° F to 93° F (∆ 16° F) at least doubles the tendency (100% greater) of fuel to dry out even without considering that the hotter air in the microclimate of sunlit fuels could hold much more water (due to the increased difference between actual and saturation vapor pressure). That difference is called the vapor pressure deficit.

In contrast, the difference between warming the fuel from 77° F to 93° F only gets the fuel 2% closer to the flash point of cellulose at 450° C.

That relationship continues to get steeper as temperatures go up.  Even warming the fuel 80° C only brings fuels 18% closer to flash point, whereas that warming would cause fuels to dry out many tens, if not hundreds of times faster.

Making Predictions based on Fuel Flammability

When making your observations about a fire, you should determine the magnitude of the fuel temperature differences under the prevailing fire danger conditions. If the wind is less than 20 mph at mid-flame height, and the sun can heat the surface of the earth in the path of the fire, then it is safe to assume that there is a difference in fuel flammability on various aspects. 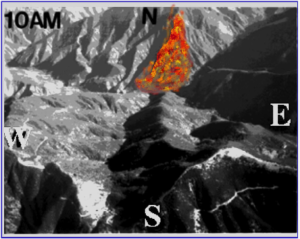 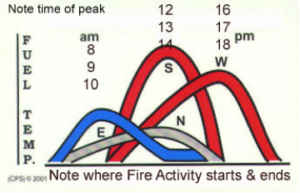 Is the Fire Behavior Getting Better or Worse?

Firefighters need to remain conscious of the direction the fire behavior is headed. Knowing if the fire behavior will tend to become more intense or less intense with the passage of time is important. There are many accidents that could have been averted if this simple observation had been made and evasive action taken earlier.

Start with the knowledge that each slope aspect has a flammability curve that corresponds to the amount of radiant energy received by the fuels. At one point in time, each aspect is at its best attitude to receive the maximum radiation from the sun. That time is the period the aspect has attained its maximum or peak flammability.

After the peak, the fuel flammability descends the curve, becoming less flammable. Every firefighter should be aware of the time at which the aspect upon which they are standing peaks in flammability.

Using the Card in the Field—Some Examples

What will the fire behavior be? Is the fire behavior improving or worsening? Look at the Flammability Card and figure out where the west aspect is on the curve. The aspect and the fuel are heating up, getting more flammable with time. The potential is properly quantified as “getting worse with time.”

Which tactic is appropriate to this situation? Should it be an aggressive attack or a defensive posture?

Consider that if an aggressive attack is selected and the situation is deteriorating (increasing on the flammability curve), might it be prudent to look for additional spot fires? The tactic selected for implementation should take into account the deteriorating condition expected over the next two to three hours. The following example shows how a crew leader could use the Flammability Card to great advantage.

A brush fire is reported at 1:00 p.m. on the south aspect at the base of a large mountain. The sky is clear and winds are moderate.

Another example would be a fire reported at 4:00 p.m. burning from a south aspect toward an east aspect with a moderate wind.

This fire is burning into cool fuel and is over the peak of the flammability curve. The resource order should reflect this fire behavior prediction.

Forest fuel is an unstable element due to the different amount of surface heating received from the sun. Visualizing the fuel bed in this manner is helpful because fire spreads differently in hot fuels than in cold fuels.

When observing fire behavior, look for the differences caused by fuel temperature/flammability variations. By observing the shadows cast by the fuel or the topography, one can easily see which fuel bed is hotter and thus more flammable.

Once you learn to identify hot and cold fuel beds, you can easily predict the where there could be variations in the fire behavior.